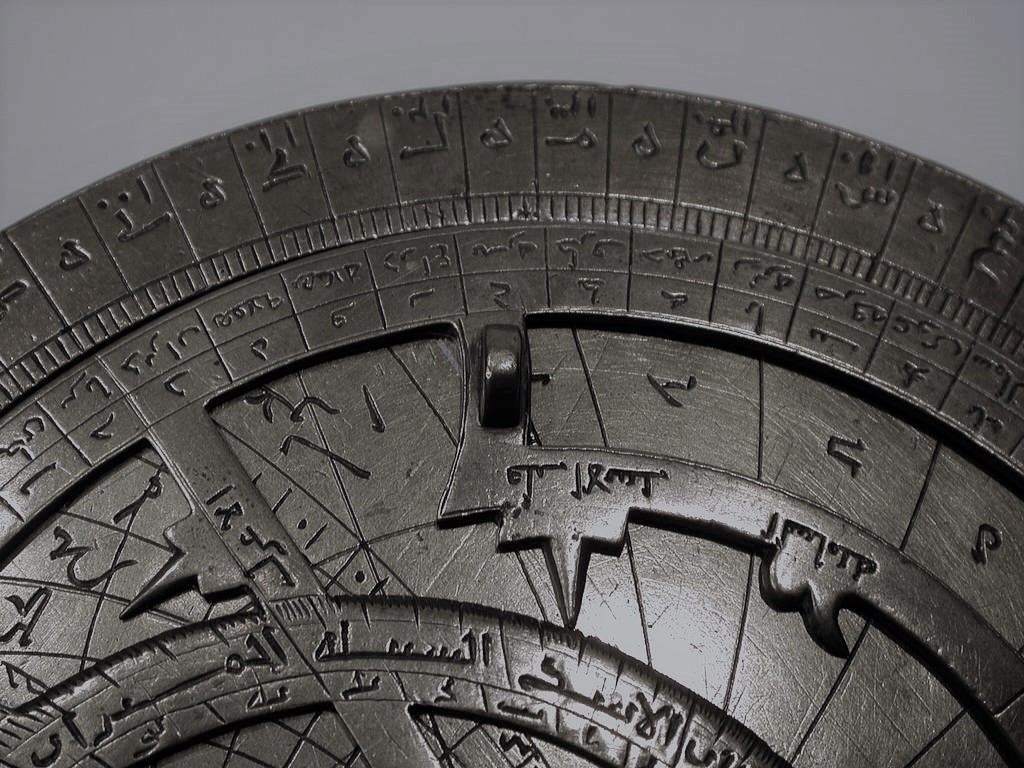 Space fascinates us. Its vastness is elusive to us, its rules largely unknown, and so it is the last place where magic still seems possible. While everything on earth appears to have been explored by this point, outer space keeps presenting us with new riddles and mysteries.

In our interest in space, we all too often look to the future: When will the Mars rover Perseverance return to Earth, when will humans be able to fly to Mars, and when will we learn more about other galaxies, when encounter extraterrestrial life? But the past is thrilling, too. Like all science, astronomy is a joint effort: it is based on a long tradition of different eras and cultures. Ancient Greece and the Islamic Middle Ages have made a major contribution to our current state of knowledge.

Ancient Greek philosophers and thinkers such as Plato (d. 348 or 347 B.C.) and Aristotle (d. 322 B.C.) laid the foundation for many scientific disciplines. Aristotle developed a form of logic, Plato’s Politeia is still being discussed time and again in philosophical and political science seminars, and the Hippocratic Oath remains a familiar concept. In astronomy, essential considerations were made, in particular by Aristotle and Ptolemy (d. 170).

The role of Arabic scholars as preservers and transmitters of philosophical, medical, and astronomical texts of ancient Greece during the Islamic Middle Ages has been long known to the scientific community. While Europe lived through the Dark Ages and science was often restricted by the Church, it flourished in areas under Islamic rule. Said texts were translated from Greek into Arabic by Arabic scholars. Thus they were preserved, later translated into Hebrew and Latin – often by Jewish authors, as was first pointed out by Moritz Steinschneider, a scholar of Judaism, in 1893 – and as a result, found their way into European scholarship during the Renaissance.

In the past, however, the originality of Arabic scholars of the Islamic Middle Ages has often been underestimated. Greek texts were not only translated by them but also commented on, criticized, and further developed. A typical genre of that time, for example, was the šukūk (ar. doubt) literature. Here, the reflections of the ancient Greeks were reproduced, their weaknesses and contradictions pointed out, and improved models proposed.

At the academy founded by the Abbasid caliph al-Maʾmūn (d. 833) in Baghdad, called the House of Wisdom (Bayt al-Ḥikmah), scholars of various religions produced innumerable translations, commentaries, and treatises. Others, such as Nasṭūlus (10th century), developed instruments for depicting the movements of the celestial bodies (astrolabes) based on ancient Greek models, some of which are still preserved to this day. The Persian scholar Naṣīr ad-Dīn aṭ-Ṭūsī (d. 1274) built an observatory in Maraghah (in present-day Iran) and improved Ptolemy’s planetary model. Based on aṭ-Ṭūsī, the Damascene Ibn aš-Šāṭir (d. 1375) developed a perfectly concentric planetary model with the Earth as the common center.

The Role of Islam: Astronomy without Astrology

Not only was Ibn aš-Šāṭir an astronomer and mathematician, he also worked as the religious timekeeper at the Umayyad Mosque in Damascus.  Like those of many of his colleagues, his works contain religious formulas such as God knows best (Allāhu aʿlam). As George Saliba, professor of Arabic and Islamic Studies at the American University of Beirut, describes in his monograph Islamic Science and the Making of the European Renaissance, Islam had in part an effect of promoting science. Its role thus contrasts with that of Christianity during this time in Europe. One possible reason is that the Muslim religion depended on astronomical knowledge: they needed it to determine the timing of religious holidays and prayers. Tables were developed for determining the visibility of the moon, for instance. In the Muslim calendar, a new month begins with the first sighting of the new crescent moon. The tables, therefore, helped to determine the beginning of the fasting month of Ramadan. Mathematical and scientific methods were also needed to determine the direction of prayer (ar. qibla).

Professor Saliba sees Islam as the cause of another innovation in astronomy: While the science was also used to determine an influence of celestial bodies on human activity and thus to predict future events (astrology) in ancient Greece, many Arabic astronomers limited themselves to the description and mathematical explanation of the observable movements of the bodies without assuming their influence on human activity. This restriction could have its origin in Islamic doctrine.  The assumption that the movements of the celestial bodies influence people’s actions could absolve them from responsibility for these actions. Then, the observance of religious duties would no longer be mandatory; violations could not be punished – the authority of religion would take harm. Professor Saliba assumes that this is why ancient Greek astronomy was stripped of its astrological elements by many Islamic astronomers of the Middle Ages. This way it was brought closer to the modern science of astronomy.

An impressive example of the possible influence of the Islamic Middle Ages on the science of the European Renaissance can be seen when comparing various Arabic models with those of Copernicus (1473-1543). According to Professor Saliba, it was Otto Neugebauer, mathematician and historian of science, who first recognized in 1957 that the lunar model developed by Ibn aš-Šāṭir in 1375 is almost identical to the one proposed by Copernicus in his Commentariolus in the 16th century. The corresponding manuscript of Ibn aš-Šāṭir had been pointed out to him by Edward Kennedy, a mathematics professor teaching at the American University of Beirut, whose student Victor Roberts, in turn, after Neugebauer’s discovery delineated the parallels of the two models in his article The Solar and Lunar Theory of Ibn ash-Shāṭir: A Pre-Copernican Copernican Model.

Aṭ-Ṭūsī had designed a model in which a smaller circle orbits within a circle of twice its size in the opposite direction, so that the edges of the two always touch at a point. This way, he succeeded in generating a linear motion of a point from the uniform motion of circles (called Tusi Couple). Copernicus used the same model in his work De Revolutionibus orbitum celestium (1543).

In 1973, German historian of science Willy Hartner shared his discovery that the Latin letters Copernicus used to designate the geometric points in his model are almost identical to the Arabic letters used by aṭ-Ṭūsī. This makes it very likely that Copernicus “copied” from aṭ-Ṭūsī. Michael Mosonovsky, professor of mechanical engineering at the University of Wisconsin, goes one step further: he identified a Hebrew manuscript by the originally Sephardic Jewish philosopher Abner of Burgos (d. 1347) as a possible intermediate link to the tradition, that uses the corresponding letters of the Hebrew alphabet in the same way.

However, there is one revolutionary element in Copernicus. After all, the prevailing models and calculations of ancient Greece and the Islamic Middle Ages, although surprisingly good at theoretically accounting for practical observations, were based on the grave misconception that the Earth was the center of the universe. By enforcing his heliocentric planetary model, Copernicus revolutionized the science of astronomy. However, the considerations of Arabic astronomers may have played a major role in the exact formulation of this model.

In the meantime, much has been published on the similarities between Copernicus and his Arabic predecessors, and the parallels of the described models are well known in science. But whether Copernicus actually had knowledge of Ibn aš-Šāṭir and aṭ-Ṭūsī and adopted their models or came to the same conclusion independently cannot be clarified beyond doubt.

Although we know of no Latin translation of their works from the time of Copernicus, there are many possible ways their knowledge could have reached him. Professor Saliba points out, for example, that many people fled west after the Ottoman conquest of Constantinople in 1453 and the subsequent fall of the Eastern Roman Empire (Byzantium). Due to the proximity of Byzantium to the Abbasid caliphate, it can be assumed that they had previously come into contact with Arabic science. In addition, some traveled to the Arabic realm for religious reasons or in search of knowledge. They would have reproduced the knowledge thus acquired in Greek and finally brought it to Europe, Saliba claims. In his review of Professor Saliba’s book, Peter E. Pormann, Professor of Classics and Graeco-Arabic Studies at the University of Manchester, points out that Copernicus had also been to Italy, where Greek-Arabic manuscripts were produced and diplomatic relations with Muslim rulers were maintained.

Today, however, most scholars agree that the Arabic astronomy of the Islamic Middle Ages made a great contribution to the astronomy of the European Renaissance and thus also to modern astronomy, not only as preservers and transmitters of ancient Greek astronomy but also as critics and further developers of the same. From ancient Greece through the Islamic Middle Ages, Jewish translators, and the European Renaissance to the modern era: our current state of research results from a joint effort.

Written and translated by Tilman Wiesbeck