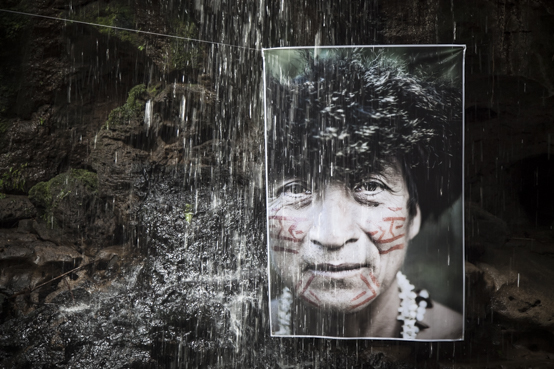 Barbara Dombrowski fights climate change with her camera in hand – or rather, she fights the public disregard for this fundamental challenge of our time. For years she’s been traveling all over the world to document the changes that climate change induces on landscapes and their inhabitants, humans and animals alike. In her exhibition “Tropic Ice_Dialog between Places Affected by Climate Change“ she combines impressions from two places, that could not be less alike. One experience they all share, however: a changing climate and changing living conditions. Through her work, Barbara Dombrowski illustrates clearly: when it comes to climate change, we are all in this together.

The photographer from Hamburg kindly answered 3 questions regarding her installation art. Starting on September 13th with a press event, you can see her work at the BUND’s property at Hambacher Forst (NRW, Germany) from September 14th until September 22nd. Please feel free to share your experience and thoughts on Twitter, Facebook or Instagram.

From Greenland to the Amazon basin, the desert of Gobi, Tanzania or Oceania –
one can hardly picture more divergent places. Yet, this discrepancy is key to
your project “Tropic Ice”. What inspired your project?

I have been working on this project for the past ten years. Previously I had studied climate change for years, causing it to be at the forefront of my mind when I started “Tropic Ice”. I think my interest in climate change started with the birth of my son in 2000. As a mother, I want all facets of our unique planet to still exist for our children and the next generations to come.
It is disastrous how we are willing to risk our resources and then just completely disregard the situation on political and economic levels. When I started the project, nobody much talked or cared about climate change. Not even in the media. It took somebody like Greta Thunberg to render the society sensible for the challenges and risks that climate change poses to all of us. This development took us way too long.

Only now some movement within politics and the economy is starting to emerge. Today many people are engaged in some kind of climate protection. But the general public very rarely knows about their projects and initiatives. The advocates usually relate to specific groups of people, which means we need more of them so that the general public will fight climate change. Photography and art are my means of contributing to this.

You travelled the world in search of visible implications induced by climate change. You encountered various landscapes, met with different people. What did you learn about the effects of climate change?

I started out by contrasting East Greenland’s people and landscapes with the Amazon basin – representing the Americas and Europe. Climate change affects both continents in such an extensive way, that they are so-called tipping points of the climate system. For many years I frequently visited and lived with the locals there. They are conscious that their contribution to the changing climate is not relevant in any way when compared to big industrial nations. Nonetheless, they experience the fragility and uniqueness of their living environment – and the global climate for that matter – every single day. In these regions, you can feel climate change progressing.

In East Greenland, for example, the population is witnessing the migration of shoals, caused by climate change through the changing of ocean currents, temperature and salt levels. Seals constitute the livelihood for the East Greenland population but because the animals feed of fish, they are bound to disappear from these places if there is no longer enough for them to eat.
In the Amazonian rainforest, the indigenous population is being threatened by large scale deforestation and reckless oil production, resulting in the economic exploitation of their resources. These practices deprive them of their basis of existence and further advances climate change.

From comparing extremely opposite weather regions, I eventually moved on to Tanzania, the Gobi desert and Oceania to complete my work on the remaining populated continents. I used the same way of interacting and interviewing the people there as before in Greenland and the Amazonian rainforest. These five places that I was able to visit are now representations of the five continents. During my stay in Tanzania in 2017, the country was going through an extreme drought, leading to many cows dying and the smell of decay being everywhere. Due to their close proximity to the equator, the barren landscape and the lack of precipitation, the Maasai are very aware of the threat that a changing climate poses to them. Before I was able to ask them about climate change they had already confronted me about it.

This marked a changing point in my work. Climate change had become a reality for some people. The Kiribati archipelago, my last stop in the South Pacific, showed me how fragile populated island chains really are. Every small change in the climate will lead to great consequences. Besides being threatened by rising sea levels, I assume that the salinization of freshwater pockets and the accompanying vegetation loss of e.g. palm trees means a great danger for the livelihood of the population.

Some of the peoples I visited used to be animists and had a meaningful relationship with nature before having been proselytized. They understood themselves to be part of a cycle like every animal, plant or even rocks. In opposition to such a mindset, people in the northern parts of the world understand humans as being at the top of the pyramid. An attitude which has lead to us colonizing the earth and (ab)using its resources.

The relationship animists have with nature-inspired me to create my second installation cycle in the shape of a circle with a centre as the focal point. I wanted to commemorate the way circles are represented in many cultures, alluding to the symbolism and meaning that are often attached. In my installation art, I want to showcase the all-encompassing connection by tying together all five continents through their representatives. This does not mean that I am excluding people from places in the north which are just as much part of the circle. Which is why I have come up with the project “Part of the Art” where everyone who would like to be part of the installation art can upload their portrait to my website https://www.tropic-ice.com/part-of-the-art. I am planning on showcasing the portraits on small Tibetan prayer flags during the big art
installation in the lagoon of Kiribati.

With regards to climate change – what general role does art inhabit?

In my opinion, there is a need for art in society to force people to face great societal issues and come up with ideas on how to engage with such. My art does this without lecturing anyone. It is necessary to create spaces through art where people can start contemplating impulses and ideas that art provides them with. Art can motivate people to engage with issues without being condescending. Most people do care about our planet but are just not aware of the massive consequences that our behavior causes. This is where art is indispensable to create an awareness in society.

All photographs belong to Barbara Dombrowski who kindly allowed us to feature them
on fortytwomagazine.com.